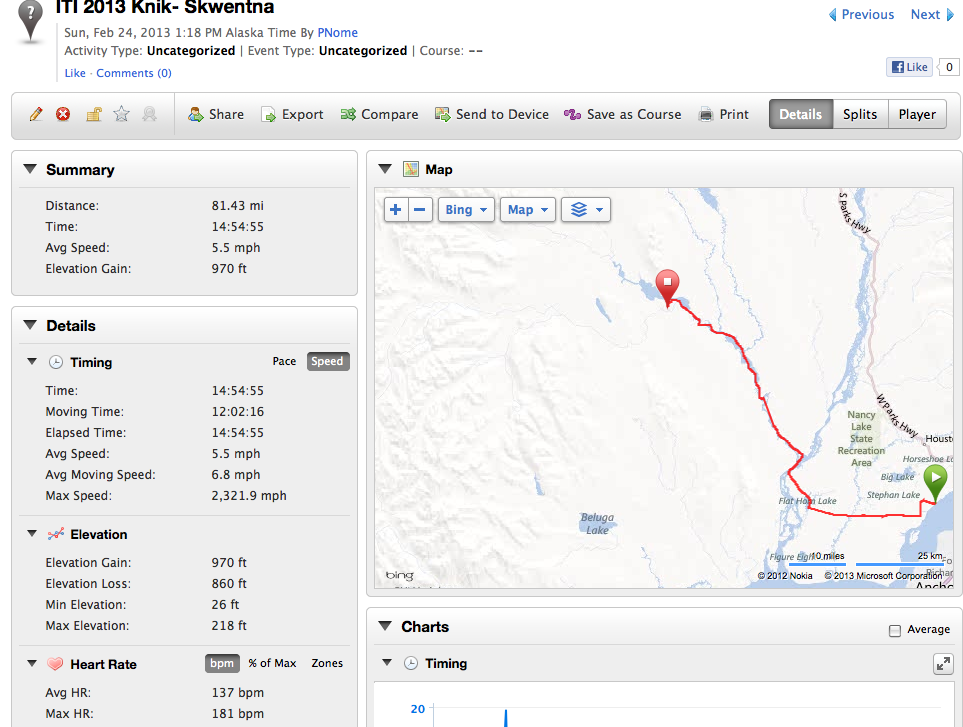 Since I didn't bring a camera I'll precede each of these posts with my garmin connect data.  Um, yes that's pretty geeky but I am clearly obsessed with physiology data especially after my years with edema.  I thought this was the coolest thing, it has HR, elevation, speed, etc...  The HR is what I really find most fascinating. Maybe because it's the only objective data to look at when I'm feeling like complete crap. Last year I had a generic HR monitor on my watch and what was curious was on the third day as Pete and I were climbing up the steps my heart felt like it was hammering through the roof.  When I looked at the HR monitor it was only 140.  That's super low.  Interesting.  This year you can actually see that the HR drops after about 8-10 hrs.  I only wish I had a power meter to see if it's completely related to power or some other cardio endurance phenomenon.  HR stayed down the rest of the race basically never going above 120-130 and averaging about 105. Quite a difference. 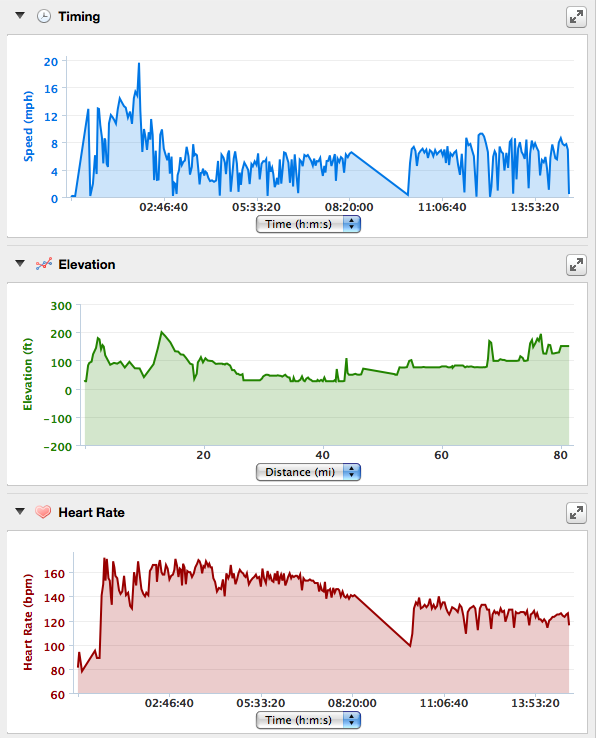 Nutritionally, I ate gu's for the first 12 hrs till I got sick of it and then switched to "real calories".  This is where LW helped a bunch to experiment on what were good foods for this race.  I found by eating mashed potato mix and oatmeal mix I didn't bonk hardly at all because the amount of calories I was able to take in by this method was a lot more than sugar, candy, etc... It's all about the calories, go figure. The food was great though, I had no blisters on the roof of my mouth nor large cravings for candy.  The downside, my stomach felt a bit nauseous and bloated a lot.  Apparently, this could be due to hydration-- still have to refine this.

START
At the race start I kind of lagged behind this year [last year I made the mistake of going the old traditional way where I was alone grinding or pushing through snow till flathorn]  I followed casually and then a whole gaggle of bikers shot out on the powerline to the point mac road.  A boring but fast ride till the trail and then more boredom.  The problem with repeating this race is knowing all the dull sections.  Personally, I think it's pretty blah till Skwentna.  By the time we hit Flathorn there was quite a bit of snow coming down and I was beginning to wonder if it would be a repetition of last year.  But a dismal dismal swamp ride that gradually improved on the river and by Yentna we were cruising.  I was hanging behind the lead pack a bit and arrived a few minutes after them into Yentna.  They were out quickly.  I ate a fast soup, sodas and then tried to move on.  This piece of river the trail became hard packed and I finally aired up the tires firm (note to self never wait if possible)-- brought a CO2 (along with 2 other small pumps) and although a pain was well worth airing up rapidly.  Temps dropped on the river probably hitting below zero but not terrible at all and actually nice riding.  After last year I felt like super man. I arrived into Skwentna around 4 ish, somehow losing an hour to the lead group.  I ate and left by 5am and caught up to everyone at Shell (who stopped) except for JP who moved right past the lodge.  I ate again at Shell and left about a half hour behind.  This section sometimes is fun if done in the dark but really  sucks in day especially in flat light. It was a grind and pretty soft but I shouldn't complain after pushing the whole section with Pete last year while walkers passed us. Fingerlake popped up and as I retrieved my drop I saw the lead guys packing up to leave.  A few of them seemed unsteady on their feet so I thought they were going to blow up. I'd give an hour sleep a try to really knock the steps section out maybe make a bit of ground.  It's a hard section to do tired. The sleep came for about 20 minutes and then I was restless.  I heard Brian and Eszter come in also trying to sleep.  My alarm went off and up I went stumbling a bit out the door. 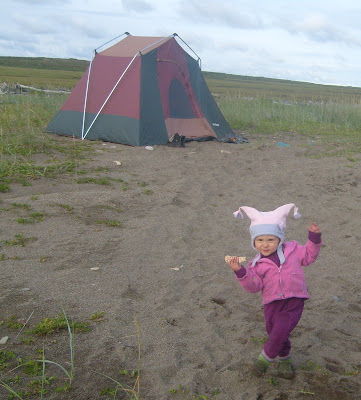 It ain't no bibler

It's amazing how comfortable my bilber tent is to me. In the four years I've had it I spent over 100 nights in it, had two different grizzlies take a swipe at it, gone through 2 tent poles that broke from downdrafts, exposed to freight train winds of 50+ mph, rain and snow... all the while keeping it like yellow sunshine inside the single wall piece of artwork. Family camping is exponentially more difficult especially without a bibler. Luckily Hahnah slept fine in a portable crib but me... the dark interior, drafty, leaky, mosquito letting netting, wind flapping bad boy had me out the single entrance door taking deep breathes at 2, 3, 4 and finally for good at 5am. Add in a little PTS from my little bear incident and voila!! Instant wakefullness.... all night long. 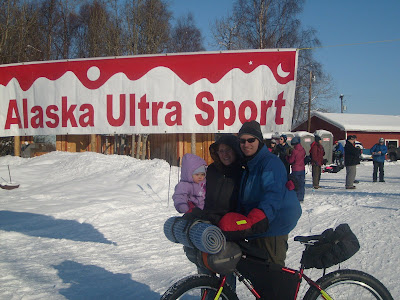 The write up is a little rough and the memories are fading fast in my old head but at least if I get something down I can forget about it till next year. I'll work on the second part this week sometime. Amazingly, while I am trying to forget the ITI Tim, Tom and Marco are still making there way up to Nome. Some hardcore dudes, check them out at the ITI Website Once again, Mike drove me to the start line of the Ultrasport Iditarod Trail Invitational (ITI) at Knik Lake, but this time my wife Sarah and daughter Hahnah are along to see me off. Another bright blue race day beginning with mild teen temperatures and lots of racers milling around. After a few photo ops the jitters began. I see a few folks from last year and say hello. Jay P wishes me luck as does Jeff O and my bike maker Mark Gronwald and bag maker Eric Parsons are there too. Eric actually made some last minute seat bag adjustments that helped keep the bag away from the rear tire. It’s hard to say which racers I wil 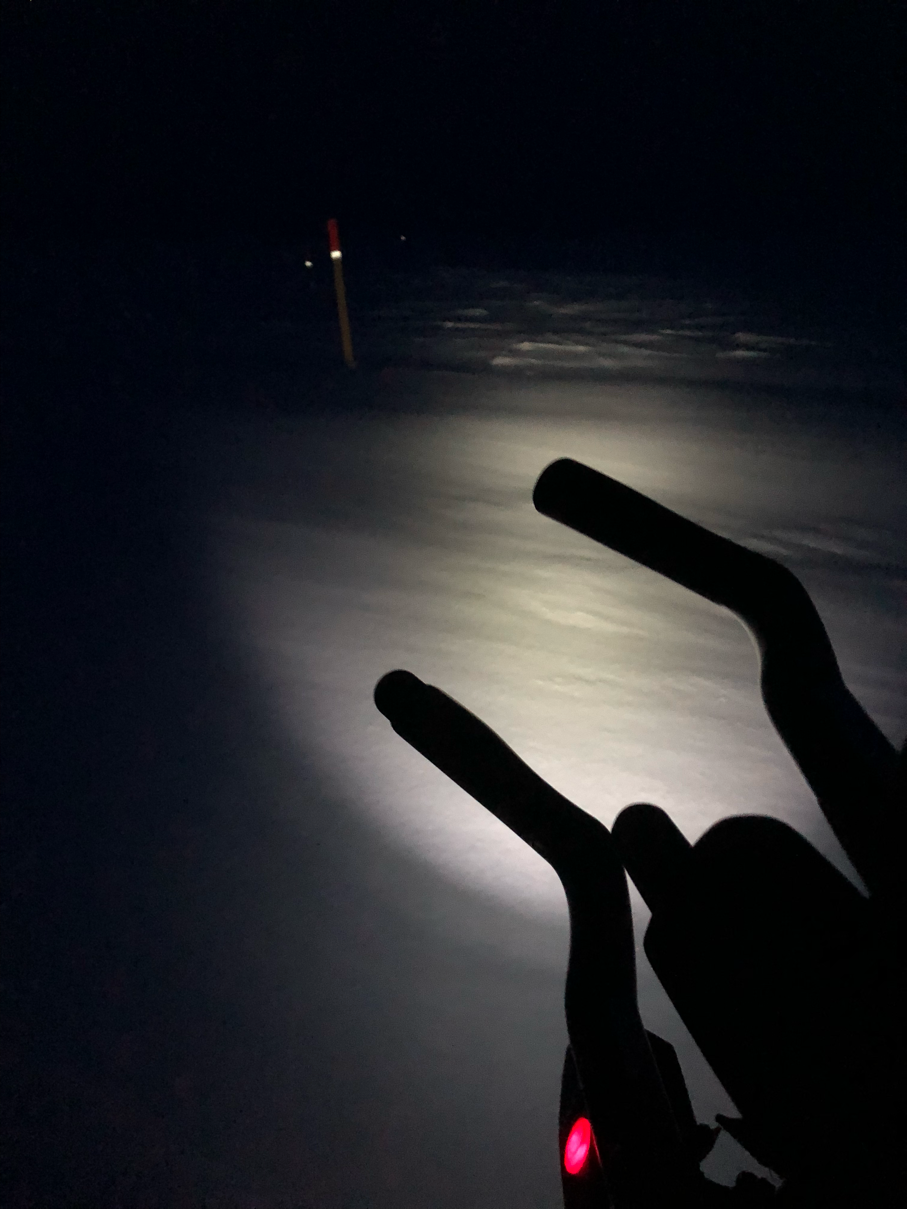 That’s basically the speed I have been training at all winter. Constant storms and heavy winds, it is getting old.  My strava account even thinks I am running bc my speed is so slow.